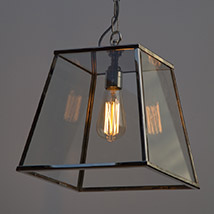 Penny Ledbury grew up in Chiswick, like her father and grandfather before her. She seems to know everyone in the neighbourhood and as we sit drinking coffee on a terrace near the shop she smiles and nods to various people passing by. When asked what she likes best about her job she replies without hesitation: ‘being part of a friendly community’. I can’t stop thinking about how different it all must have been 51 years ago when her grandfather Ken and her father Terry opened Teleonics in the same shop on the same street.

Ken, was an electrical engineer during the war: his job was to repair broken radars. Together with his son, Terry, he first opened the shop in 1965, repairing radios, TVs, and other appliances. It was given its current name Chiswick Lighting in the 1990s. Terry was just 16 years old when the shop opened but already had a passion for his trade. He has a wealth of knowledge about lighting and always keeps up to date with what’s new in the business.

Penny joined the family business during her gap year. She went on to study psychology, but when her grandfather passed away she and her older brother, Alan, both decided to come back to the shop and work with their father.

Her strength is designing new lighting layouts and solutions for her clients. Her brother is very ‘hands-on’ and works in the workshop with Terry, doing repairs and making new fittings. She describes her relationship with her dad as a friendly and complimentary one and wouldn’t have it any other way. Will her daughter join the family business? It is too early to tell – she’s only just turned 5! But while Penny insists she would never impose the job on her, she already loves spending time with Terry in his workshop.

It is hard to say what the next Big Thing in lighting will be. LEDs are becoming more and more important both for the company and their clients: in fact, they specialise in bespoke LED lighting systems. There are new developments in this field every week and they are really interested in the future of these lights.

Penny has several ideas as to how to expand the shop in the next few years. Recently, the repair and design branches of the company have seen good growth and they count among their clients The Old Cinema (an antiques ‘department store’ in Chiswick), the Google temporary offices in Victoria, a number of property developers as well as residential clients. She hopes to continue expanding these design projects, as it is a part of her job she really loves.

One thing is for sure: the Ledbury family’s knowledge and expertise will always be much in demand.