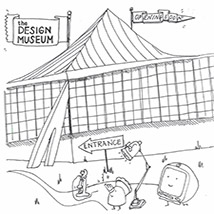 Before the first London Design Museum was opened, there was the V&A, books on William Morris or the Bauhaus but nothing on the history of Industrial Design and nowhere exhibiting mass production design.

Sir Terence Conran’s vision 30 years ago filled those gaps. He never wanted it to be called a museum though: it is thanks to its first director Stephen Bayley that Design entered the arena of respectable culture under its new name the London Design Museum.

For nearly 30 years, the Design collection was hosted at Shad Thames. Originally a building that had stored bananas and Korean military uniform, it was then turned into Bauhaus-on-Thames.

In 2006, its current director Deyan Sudjic, was recruited with a brief to move the museum to a larger space. After looking at various sites near King’s Cross and City Hall, Deyan Sudjic was approached by RBKC towards the end of 2007. They wanted to give new life to what was once known as the Commonwealth Institute building.

The Commonwealth Institute is considered by English Heritage as second only to the Royal Festival Hall in its significance to post-war architecture in London. It was opened in 1962 at a time where there was construction rationing and certain materials couldn’t be used.

Because of this, buildings of the ‘60s can deteriorate quickly. Before going forward the museum team had to make sure that they could optimize the space and use it not only for their permanent collection but also for temporary exhibitions, learning spaces, design workshops, a library, an auditorium, a museum shop, a café and a restaurant.

Designed by John Pawson, known for his rigorous and simple architecture, the Grade II listed fit-out has been completed by Willmott Dixon who have a long track-record restoring listed buildings into modern spaces fit for the 21st century.

After giving Zaha Hadid first solo show in Britain, and having established the careers and reputations of many now-famous names, such as Charles and Ray Eames or Dieter Rams, the new Design Museum has a long future ahead.

It will open with the exhibition Fear and Love: Reactions to a Complex World curated by Justin Mcguirk.

But as Deyan Sudjic says “Building a building is nothing by comparison with actually making it come alive.”

Let see what the public will make of it. If you want to know more or suggest your favourite objects visit their new website.