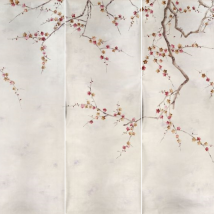 Behind the scenes at de Gournay

‘Whatever you have in your rooms think first of the walls, for they are that which makes your house and home, and if you do not make some sacrifices in their favour you will find your chambers have a kind of makeshift, lodging-house look about them…’ – William Morris

Some 30 years ago, Claud Cecil Gurney was faced with a dilemma. His London house was covered in beautiful but very tired antique chinoiserie wallpaper desperately in need of careful restoration. Much of it was torn or cracked, and those parts that were still intact were worn thin by countless curious hands and years of neglect. To remove it seemed sacrilegious but in spite of his best efforts to identify a local restorer, he could find no one.

Finally, and after much consultation and research he decided to go back to the original source in the hope of finding someone still versed in the traditions of chinoiserie paper. After all, this famous city in the East had been one of the main centres of production during the eighteenth century.

Historically wallpaper, with a few notable exceptions, has been the poor relation of the decorative arts. Rather than being a room’s primary focus of interest it has generally been thought of as mere ‘background decor’. Nevertheless, its role in the overall decorative scheme is a vital one. The choice of wallpaper design greatly affects the mood and style of a room. It is likely to influence the choice of other furnishings and may be indicative of a room’s function. It will also often reflect the age, status and gender of its inhabitants.

By the early nineteenth century, wallpaper had established itself as a luxurious and elegant commodity in the UK. Chinese papers and French scenic decorations had started to become widespread amongst the more affluent households, and throughout the century these styles slowly filtered through into middle class and then more working class households. However, as its use became widespread the debates and controversies about taste and class soon surfaced until finally wallpaper fell from fashion. Even those who designed wallpapers themselves – including William Morris – often preferred to use other kinds of wall covering, or none at all.

Yet, while furniture and textiles are traditionally passed down from one generation to the next, wallpaper (owing to its fragile and ephemeral quality) is frequently damaged, covered over or removed altogether, so leaving it absent from the historical record.

Claud Gurney arrived in Shanghai full of hope and excitement but what he soon discovered was that while the technique and art form may have originated in the East, the Chinese themselves never actually used this beautiful material in their own homes. The artisans were simply fulfilling the demands of the export market. More frustrating still, although the Chinese manufacturers were very happy to supply him with new papers, they were less willing to take an interest in his existing wallpaper!

To rectify this situation, Gurney boldly decided to set up his own company, working with craftsmen to restore antique wallpapers and keep the traditions and techniques alive. And so, in 1986, de Gournay was born.

de Gournay today is still very much a family-run business. The company’s highly skilled artisans paint exquisite chinoiserie wallpapers with visually dramatic scenes such as Japanese and Korean landscapes or vistas inspired by the French ‘Papiers Peints Panoramiques’ so beloved of the Victorians. They can also individually customize each piece, no matter how complex from hand-gilding using 22ct gold leaf to creating a unique colour that subtly compliments an interior.

One of their latest designs is the Coco Coromandel inspired by the original Chinese lacquered screens. It is said that Coco Chanel once owned 32 of them. Painted by hand onto a traditional Chinese ‘Edo Xuan’ rice paper, de Gournay’s new design is a painterly interpretation of a section from one of the Chanel Coromandel.

What de Gournay has achieved is not only the revival of a lost art but perhaps more significantly it has transformed wallpaper and wall furnishings into something that can now be loved and treasured through the generations.