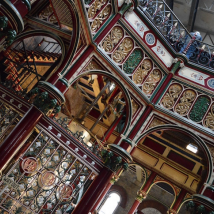 In the mid-19th century, London was ravaged by recurring epidemics of cholera and typhoid. Originally believed to have been caused by ‘foul air’, it was not until 1854 that the source of these diseases was identified as contaminated drinking water. In fact, in 1848 an order was passed to close all cesspits and to link residential drains directly to the sewers and to the Thames, resulting in the deaths of over 14000 Londoners. The next few years saw many surveys and reports which prudently advised that the Thames should not be used both as a sewer and for drinking water.

Unfortunately these efforts were largely in vain, until the incredibly hot summer of 1858. Coupled with an increasingly polluted Thames, the heat gave rise to a huge stench known as The Great Stink of London, which overwhelmed all those near the river – including the notable occupants of Parliament. Now that the politicians and senior statesmen were directly affected, legislation was quickly passed to proceed with the mammoth task of making London a safer, cleaner city.

Our sewer system today owes its existence mainly to the vision and skills of one man, Sir Joseph William Bazalgette. Sir William was Chief Engineer to the Metropolitan Board of Works and was the mastermind of a unified system of main drainage for London, which remains the back-bone of London’s modern sewer system.

By the time Bazalgette started work, most of London’s rivers and streams were carrying both sewage and rainwater and separating the two seemed almost impossible. Bazalgette however formulated a new design to deal with the dual requirements of sewage and surface water run-off.

He constructed 85 miles of new underground brick sewers below the streets of London. These were connected to over 450 miles of main sewers, which in themselves received the contents of 13,000 miles of small local sewers. All in all, the system dealt with well over half a million gallons of waste on a daily basis, which was transported to the East End and finally discharged, untreated, into the Thames and flowed out to sea.

While it is not perhaps the most savoury part of London’s history, Bazalgette’s construction of the sewers is undoubtebly one of the most important – and surprisingly fascinating! – Victorian legacies.