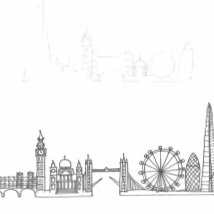 The ever changing London skyline

The London skyline is one of the most rapidly changing views in Europe: just count the number of cranes and you can see how much building work is going on.

But what is really happening? Here are a few of the changes taking place.

Portobello Road has always been a busy, bustling area, but since 2015 The Westway Trust and RBCK have had backing from the Mayor of London for plans to re-invigorate and support the area. The proposal, affecting the existing markets and traders is not without controversy. Plans are afoot to create new space for local cultural and community activities, make significant improvements to local green spaces and most importantly to make more provision for local housing.

After years of uncertainty, one of London’s most iconic and loved buildings, Battersea Power Station, is finally undergoing a long-overdue facelift. Frank Gehry and Foster + Partners are collaborating on a vibrant new community area, offering homes, restaurants, shops and event spaces. Foster + Partners are designing the Roof Gardens, a ‘strongly delineated, rippling building . . . organic and soft…’ while Gehry is overseeing an almost futuristic cluster of buildings known as Prospect Place. They are also building a new Zone 1 London Underground station and connecting it to the River Bus services. This will definitely be one to watch!

It is worth noting that since April 2016, London boroughs have adopted a new Code of Construction Practice aimed at minimizing the impact of noise, vibration and dust across all London boroughs. Luckily for you, this means that noisy work on Saturdays is now prohibited … as well as Sundays and Bank Holidays.