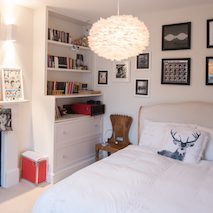 Whether you want to completely re-decorate, or think up clever storage solutions for an ever-expanding handbag collection, we are here to help you and your child manage this sometimes tricky transition to a more ‘grown-up’ bedroom.

Earlier this year we embarked on such a project, which seemed simple enough on the surface, but in fact proved an exciting challenge for our joiners and the design team, which included members of the client’s family.

The brief was to refurbish a relatively small room into the perfect bedroom for a teenage girl. Every nook and cranny was to be put to use, making space for all the text books, workbooks, folders, school bags, pencils – not to mention the clothes, shoes, accessories and everything else a 13 year old needs. The solution, a new fully fitted wardrobe and workspace that would cater for her as she grows up.

The existing wardrobe had been set behind a false wall so before work could begin, this had to be ripped out and the space reassessed. Our joiners then started from scratch, building in situ and thereby generating about 30% more space to include extra drawers, adjustable shelves and rails for long and short hangings. The interior was veneered with oak and lit with LED strip lights activated by a motion sensor.

The second stage of the project involved building a big, comfortable L-shaped desk, located in one corner next to the window. Once on site, we realized we were able to remove another false wall that covered the original brickwork and immediately add about 25cm to the width of room. Drawers, cupboards and niches were then fitted underneath the desk, and shelves built right to the ceiling.

With some careful thought and clever joinery, this room was transformed into a beautiful working bedroom, perfect for its new occupant.

In fact, the company have recently completed a number of similar projects that transformed a child’s bedroom into one more suited to young adults.

A second brief also involved fitting an entire wall with bespoke wardrobes, shelving and storage for the bedroom of a 16 year old girl. She wanted a much more modern look than she had had previously, which we achieved by using soft light colours – and introducing fun touches, such as a feather lampshade.

A third project included the ‘freshening-up’ of another girl’s bedroom. The walls were painted in the same chic shades as the rest of the apartment but splashes of colour were added to inject the room with a very different vitality from, say, her parent’s bedroom. For example, a beautiful Osborne & Little wallpaper was used to set off the teak bed frame and the Moroccan turquoise of the new chest of drawers.

Updating a bedroom can be an exciting project for both child and parent.  Whether you want to make the investment into bespoke furniture or just create a more ‘grown-up’ atmosphere the results will dramatically change the way it is used and can help stop teenage ‘spread’ into kitchens, dining rooms, family rooms, etc.